Arsenal Tequila Reposado is 100% Agave, and rests in white oak for up to one year.

Tequila Arsenal is the pride of a family with a true tradition in the art of producing Tequila, who, through hard work and experience, was able to effectively distill, in a bottle, the essence of one of the most widely valued spirits in the world. Tequila Arsenal 100% Agave is thus the living proof that high quality, efficiency and experience can also be affordable.

Tequila Arsenal is produced by Autentica Tequilera in its own distillery, "La Autentica", which was founded in 2003. Since then it has continued a strict process for the selection of the highest quality Agave, and has followed traditional styles of hand-crafted production. As a result of this "La Autentica" has not only found a place amongst the most prestigious in the magical town of Tequila, where 70% of this spirit is produced, but has also acquired international prestige through its premium Tequilas, which have received certifications, awards and recognition beyond our borders. Tequila Arsenal has thus received honors only few others have been awarded.

Whichever way you prefer it, Blanco or Reposado, straight or mixed, you will be able to taste the rich Agave notes that characterize it. Tequila Arsenal has been prepared with great dignity to satisfy the most discerning palates.

Use the TEQUILA.net Aroma and Flavor wheel companion to help find specific characteristic when tasting Tequila! 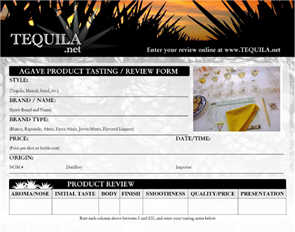 Use the TEQUILA.net Tasting companion to help record your tastings and keep track of your reviews.

Join thousands of other members in the TEQUILA.net Community who love the wonderful Spirits of Mexico!

Have a question or want to add your products on Tequila.net?